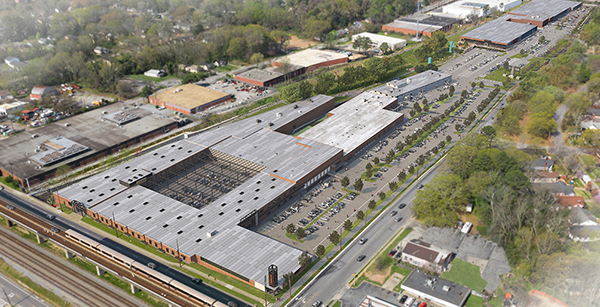 But the investment partners are involved in more than real estate development in the West End. In addition to forging ahead with the adaptive reuse development – which includes the addition of a food hall and Class A offices at the popular entertainment destination – Ackerman & Co. and MDH Partners are committed to supporting efforts to improve the community.

An example of this is the decision to include two projects in the West End Community Improvement District: the 442,562-square-foot Lee + White project at the corner of Lee and White streets that Ackerman & Co. co-owns with MDH Partners and the Ackerman-owned 1200 White Street, a 212,500-square-foot facility now included within the CID.

Formed in 2017, the CID funds a variety of infrastructure, public safety and other initiatives. Ackerman & Co. will contribute extra property tax revenues from its properties located within the CID to help fund the CID’s programs.

West End Improvements
“We’re very happy to support the wide variety of initiatives underway in the West End CID that will benefit West End residents and those visiting the community,” said Leo Wiener, President of Ackerman Retail, the division of Ackerman & Co. spearheading retail and restaurant leasing at Lee + White.

Added Evan Ziegler, Senior Vice President of Investments for Ackerman: “As the owner of the recently acquired 1200 White Street Building, in addition to Lee + White, we see great value in becoming a member of the West End CID. It’s exciting to see the expansion of the CID along White Street.”

The West End CID’s initiatives include community programs such as the weekly Fresh MARTA Market and the Soccer in the Streets program at the soccer field next to the West End MARTA station.

The I-20 cleanup and landscaping project at the Lee Street and Joseph E. Lowery Boulevard interchanges and a storefront redesign program and pedestrian improvements along the Ralph David Abernathy Boulevard corridor are among the current West End CID priorities.

The CID also has received a dedicated patrol car that will be used for safety patrols in the community.

“Ackerman bringing their properties into the West End CID is a huge win for us,” said Chris Pierre, Project Manager for the West End CID. “The fact that Ackerman sees the benefits of the CID speaks positively to other property owners who might be interested in including their projects in the CID.”

More about Ackerman & Co.’s West End Projects
A reinvention of mid-20th century warehouse buildings in Atlanta’s historic West End, the trendsetting Lee + White mixed-use development is a melting pot of homegrown entrepreneurs and innovative businesses. Craft breweries, distilleries and food manufacturers are among the pioneers that joined Lee + White in the first phase of the redevelopment. The next phase of the transformation is adding creative loft offices, a 19-vendor food hall, unique retail concepts and a Central Lawn gathering place.